From Monday, July 2 to Thursday, July 5, we took Iceland Travel's Glaciers and Volcanoes Tour around the southern part of the island. As you can see from this map, we covered quite a lot of territory in four short days. 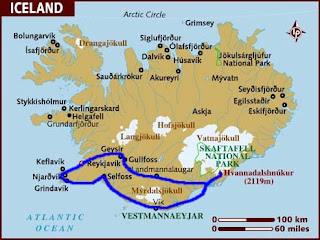 Generally, I'm suspicious of the idea of a tour. The only other one I've ever been on was in the Grand Canyon. The guide was knowledgeable but with a bit of an attitude. My fellow tourists were a mixed bag containing one too many complainers. Then 9/11 happened on our second day, which blew a hole in everything.

A friend of mine warned me against going on another tour. She went on one in Turkey, she said, and just when she found something of historical interest, the rest of the people wanted to go shopping.

I guess we lucked out. Mind you, there was plenty of opportunity to spend our American dollars everywhere we went, but our tour guide was beyond excellent, and the rest of us were more than game to follow where she led us.

Here's the story of my great Icelandic adventure.